He Had a Hammer 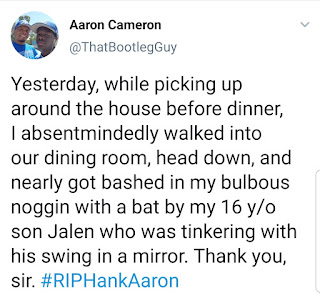 Henry (Hank) Aaron was the first legendary athlete I remember learning about. I don’t know how Black History Month is taught in elementary schools today, but in the late 1970s and early 1980s, the teachers made it feel like a begrudgingly obligatory lesson plan for a few fleeting afternoons. Every year, the cardboard cutouts of a lone snowflake or a “Happy New Year” sash symbolizing January on the classroom corkboard gave way to hearts and cupids for February. Over in the corner, though! – That’s where the sun-hastened aging of the images of Dr. Martin Luther King, Booker T. Washington and Harriet Tubman were stapled aloft for the umpteenth time.

Back then, there were only two or three athletes who your local school board might elevate to the exalted time-killing status of “biographical worksheet”. Althea Gibson was one because (a) she deserved it and (b) for the box she allowed teachers to check in the nascent days of the modern gender-equity movement. Henry Aaron was the other – presumably due to the recency effect over Jackie Robinson and the fact that the deification of Muhammad Ali – at least by a certain demographic – was always inversely proportional to the state of his health and the base in his voice.

Of course, Aaron’s life – as taught to us from that generation – was wildly whitewashed and distilled down to “born in Mobile, Alabama”, “played for the Braves” and “broke Babe Ruth’s home run record”. Sadly, today, even with the benefit of both societal hindsight AND actual insight from the man himself, the abhorrent racism that rained down upon him is wrongly viewed as something Aaron “ignored” or “overcame” and not the steadfast Faustian Bargain of being a black man in America.

After hearing the news of Aaron’s passing, I thought of my grandfather. When I was five-years-old, he got me one of those rickety plastic pitching “machines”. It might’ve been this one for all my memory can recollect these days. He put it together, we headed to a vacant lot – which hadn’t yet gone extinct in southern California – and before long all the neighborhood kids were playing a pick-up game. A couple of years later, I remember my grandfather watching a KTTV broadcast of his beloved Dodgers and going on and on about Houston Astros’ star-crossed fireballer J.R. Richard. My parents hated baseball, so my love for the game is mostly my grandfather’s fault.

Like Aaron, both my grandfather and father grew up under the tyrannical tenets of the Jim Crow south – America’s offspring of her Original Sin. And, neither the “National Pastime” for Aaron nor the decades of military service for my pops and grandpa were enough for large swaths of this country to consider beyond the color of their skin. (I won’t get into the unspeakable indignities my grandfather withstood from his white countrymen in the U.S. Navy, but my pops once told me that “Don’t salute no n*gger” was an acceptable unwritten rule in the Marines when he enlisted in 1968 and lasted…well, you probably don’t wanna hear about that.)

Of course, I thought about my 16-year-old son Jalen. I’ve shared his entire life with you guys – first in my old Bootleg music column from before he was born through an assortment of social media platforms today. He’s a high school junior. He’s driving. He can eat three pounds of chicken wings in a single sitting. HE WEIGHED THREE POUNDS WHEN HE WAS BORN.

And, there’s a direct line from Henry Aaron to the opportunities afforded every black ballplayer who took up the fight out of obligation and chased their dream out of love and desire.

Those opportunities are so precious, friends. And, always be mindful of who you’re entrusting with their dreams. The best advice I ever received was from another baseball dad who had a son a few years older than Jalen. “Get that boy around black baseball coaches whenever you can”, he said. “He needs to learn shit from dudes who have seen shit.”

I guess that’s why Aaron’s death has hit me so hard. The Hammer bludgeoned those ghosts of the not-so-distant-past so men like Tracy Sanders – who clubbed nearly 200 professional home runs – could impart hitting wisdom to my son since Jalen was five-years-old. And, then there’s Kennard Jones – a third-round draft pick of the Padres in 2002 – who also has worked with J at the plate and mentored him to fight to stay behind it for as long as he can, knowing that black catchers are cruelly considered anomalous.

As we approach the second year in the grip of this worldwide pandemic, I wonder – and worry – how many games my son has left to play. I wonder – and worry – about the world my wife and I are about to send J into after his baseball gear bag is inevitably buried in our backyard – a noxious disembodied essence left to haunt our neighbors’ open windows on warm summer nights. In that same world, Henry Aaron was objectively the best of humanity and endured the worst of it. When I think of my son, I know Henry’s hammer is in good hands. 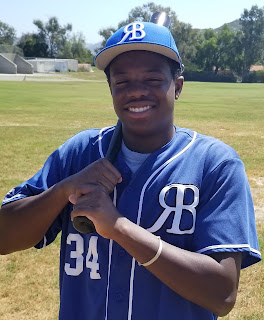 Labels: Cam Fam, Can I Be Serious?, Sports