The Walk-Off and the Save


My eight-year-old son Jalen turns nine in less than a week.


Earlier this week, while driving J to school, he BEGGED me to stop singing along with Michael Jackson's Billie Jean when it came on Sirius XM's '80s station.* "You're embarrassing me!", he shouted from the confines of the back seat. Jalen's "no singing" edict followed his unilateral implementation of a temporary restraining order against me – an unwritten, unspoken agreement that requires ten paces of separation between my son and I when I'm walking him to his classroom in the morning.


* -- Recently, while we watched "Ghostbusters II", Jalen was similarly (and inexplicably!) unimpressed as I sang along with Bobby Brown's "On Our Own" anthem. I couldn't believe it. Nearly 25 years after its release, I was still able to nail EVERY lyric. That's better than Bobby Brown could claim roughly one year later at the 1990 MTV Video Music Awards.


I first remember feeling a bit of figurative separation with Jalen late last spring. I'd meticulously planned a father-son weekend in San Francisco with two tickets to a ballgame in Oakland as the admittedly predictable main event. Seats directly behind the Athletics' dugout! When I excitedly broke the news to Jalen, he responded with the equivalent of a verbal shrug ("OK") and quickly returned his attention to our living room television.


Leading up to our flight on the first Saturday in July, Jalen seemed unaffected by all of the things that usually elicit inquisitive 6:00 AM wake-up calls from him, like "Who do you think the A's starting pitcher will be?" or "When we get on the BART train, can we ask the driver to go 100 miles per hour?" or "Do kids still get to run the bases after the game?"
And, Jalen has flown so many times that he's no longer even awed by airplanes. Instead, like the cynical beaten-down business traveler, he reserves what little emotion he can muster for expressing contempt towards his perpetual placement in the middle seat.


We arrived in the city on one of San Francisco's typically frigid summer afternoons. And, like clockwork, I managed to lose my bearings on the two-block walk from the BART station to our hotel. At 4'4", Jalen is a full four inches shorter than my wife, but he inherited every ounce of her "know-it-all-ism".


"Can't you use your phone to find the hotel?"


"[Exasperated sigh] What's the NAME of the hotel, Dad? I'll just look up at all the buildings until we find it."


After a few minutes of relentlessly walking in circles, we found our hotel. That evening, we met one of my oldest friends and his family for dinner at Farmer Brown – a nouveau soul food spot in Union Square. I'm pleased to report that I didn't regret one drop of the four Mason Street Manhattan cocktails I sucked down. Not until 12 hours later, at least.


Jalen: "Dad? Are you throwing up because you had too much to drink last night?"


I had hoped to sober up with the terrific breakfast served at the Taylor Street Coffee Shop, but by 8:00 AM, there was a line out the door. Thankfully, two bacon, egg and cheese biscuits from Burger King cured what ailed me. Our only full father/son day in the Bay Area was off to a rocky start – which is to be expected when you promise your son the platter-sized pancakes that only a greasy spoon can produce and deliver a convenience store chocolate donut, instead.


So, it was up to the A's game. An entire weekend built around enjoying each other's company hinged on the occasionally tedious style that's occasionally associated with the American League. A's versus Mariners! Two teams that finished a combined 42 games under .500 the previous season!


Out of the corner of my eye, I sized Jalen up for any sign that indicated he was having a good time. As we traversed the overpass towards the ballpark, J exuded the indifferent aura of "high school cool". In years past, I watched him nearly knock people over as he speed-walked his way into a Spring Training game. Now, with the A's showing signs of life in the mid-season standings AND a throwback Oakland Oaks cap giveaway, J's gait reminded me of mine on a Monday morning after a three-day weekend.


Our oddly detached day even extended into the grotesquely overpriced team store. After one lap around the suffocating, shoebox-sized shop, Jalen has usually asked for $500 worth of merchandise – that's up to THREE things! – but, nothing caught my kid's eye. What I would've given to have my old, excitable eight-year-old back. If he and I could no longer irrationally bond over baseball, I don't know what I'd do. Yes, it's melodramatic. But, it's also my favorite thing in the world to share with my son.


As we trudged off towards our seats, I silently hoped for at least an entertaining game. Maybe that would reanimate the pocket-sized chocolate-brown corpse beside me.


For those of you who don't know, Ryan Cook was the A's lone All-Star representative last season and, briefly, the team's closer. He was stationed at the end of the A's dugout and dutifully signing for anyone in the vicinity. Personally, I was just glad to see Jalen finally…


"Dad! Did you bring a baseball that I can get signed?!" 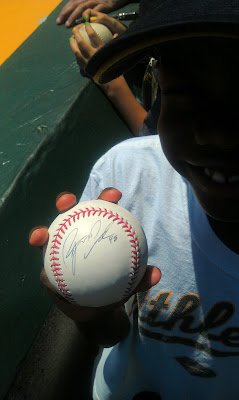 In the blink of an eye, J had worked his way towards the front of the small mob that had formed in front of Cook. And, from a distance not much farther than your computer screen is from your face, J politely asked the All-Star, "Ryan Cook, could you please sign my ball? I'm a pitcher, too!"


Whew. Now, I could exhale.


But, wait! The Mariners were starting Felix Hernandez on the mound – one of the best pitchers in the game and a notorious Athletics killer. The Cook autograph would keep J happy for a few innings, but a reappearance of Oakland's somnambulant offense could quickly ruin the mood.


With the score tied 1-1 in the bottom of the eighth inning, Oakland's Chris Carter tapped a foul ball down the third base line that was scooped up by third base coach – and my 37th favorite Athletics player of all time – Mike Gallego. Jalen stood up and leaned out over the dugout roof in Gallego's direction, but Gallego's underhand toss towards J's outstretched glove was short by about three feet. The ball ricocheted away and rolled into the section of seats on our left.


I was more bummed than my son, but there was no time to feel sorry for him. I'm not being callous. It's just that I really had to use the bathroom. There was a young woman and her father sitting next to us who I'd been chatting up throughout the game. They offered to keep an eye on Jalen while I was gone. Hey, if you can't trust two strangers in the fourth most dangerous city in America…


When I returned, Jalen was holding what I thought was the baseball that he'd gotten autographed earlier in the afternoon.


Me: "Be careful with that ball, J. You don't want to smudge the autograph."


Jalen: "This is a new ball. Mike Gallego gave it to me."


Young Woman Next to Us: "Yep! He came out of the dugout and tossed him a ball! I had to get your son's attention, but the coach tossed it and your son caught it!" 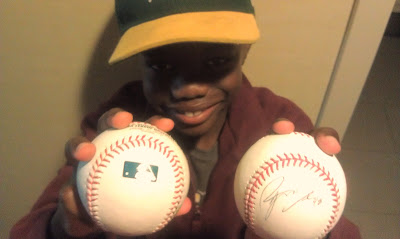 Well, then. Don't YOU feel bad for harboring those "stranger danger" thoughts a few sentences ago? Also…if you're going to tell my wife about this post, could you not START with the whole "…left my son with strangers…" thing? Thanks!


The A's and Mariners remained tied until the bottom of the 13th inning when Josh Reddick drove home Jemile Weeks after four hours of great baseball. It had been a l-o-n-g afternoon, but any time with my son is a good time – even if he IS getting older and won't be a child forever.


Jalen: "Do kids still get to run the bases after the game?"


Me: "You wanna run the bases?