As middle-age moves into both my emaciated muscles and meandering metabolism, I have made a sincerely insincere effort to be negligibly more mobile. With my ubiquitous FitBit affixed firmly to my six-inch wrist; I left New Stately Bootleg Manor around 8:00PM in an attempt to walk off the second-rate takeout burrito that had overstayed its welcome in the attic of my abdomen.

Our new neighborhood is a collection of cul-de-sacs sewn together with two or three actual streets built atop an assortment of natural inclines and their geological antonyms. With a light rain falling, the intermittently-placed streetlights were more useless than usual, so I headed south and then west with the seasonal residential compass – garishly-lit holiday yard decorations – as my substitute North Star.

Over the past few years, the holidays have become a case-study in Hebbian Plasticity for my psyche. As I unsteadily shuffled across the saturated sidewalks, random thoughts pinballed around my brain. Inevitably, memories of my late grandfather found their way in. He passed away earlier this year after a short (or long) illness at the age of 90.

Funnily enough, the first thing I usually think of before the flood of more meaningful memories from my grandfather is that he died on May 11. This lightly-read blog has gotten a bit of mileage from "the events of 5/11" and the mocking of my own mortality. So, of course, he passes away with dignity and grace while I faced my more immediate health scare with flailing limbs and flop sweat. Figures.

"Dignity" and "grace" are admittedly hackneyed callouts that could appear on anyone's epitaph – earned or otherwise. And, to be fair, clichés don't do John Cameron justice.

Like you and me, my grandfather was flawed. My earliest -- earliest -- memories of him were taking walks around his Long Beach neighborhood with my brother. Just the three of us. Periodically, my grandfather would reach into an ostensibly random shrub, pull out a flask and take a quick swig. Decades later, I smile at the imagery – equal parts shameless and stealthy. But, those romanticized sips were symptoms of a more insidious issue and in the spring of 1986 – when I was 13 – my grandfather's alcoholism (nearly) killed him.

The parenthetical actually serves a purpose. My grandfather was supposed to die. My mother picked up my brother and I from school several weeks after my grandfather – her father – collapsed and was found non-responsive. She told us through tears and an absence of sugarcoating that the doctors said he was going to die. There was nothing more they could do…so, my grandfather beat the reaper? I guess? I don't have much faith in the metaphysical, but I wasn't about to look a gift miracle in the mouth.

My grandfather made the most of his resurrection. He kicked the bottle – and the flask – cold turkey. His daily libation strolls evolved into actual exercise as my grandfather accumulated miles and miles of walking to his biometric resume. At the time, I didn't appreciate this unscripted second act as much as I do today. Save for a cane he now needed to steady his gait, my grandfather was BACK and better than EVER! (See? Hackneyed.)

In 1995, I was a starving college student who'd just moved in to a studio apartment about three blocks from my grandparents. I made $8.00/hour serving ice cream and frozen yogurt to the beautiful people on the beach. After rent, utilities, textbooks and a steady payout for car maintenance, I had just enough "walking-around money" left over to subsist off of whatever broken waffle cones I could embezzle out through the back door.

Not long after moving in, my grandfather called and invited me over for dinner. Every Monday night thereafter, my grandparents would cook an obnoxious amount of food – one night there were six Cornish game hens stuffed with macaroni and cheese…another time, in a stockpot as tall as the still-diminutive Mrs. Bootleg; there was enough corned beef and cabbage to feed 80 Irelands.

And every Monday night; my grandparents would fix two tiny plates for themselves, one king-sized feast for me and then send me home with all the leftovers. (On Tuesday morning, while I was in class, my grandfather would leave me a voice mail with meticulous reheating instructions, since I didn't have a microwave.)

My grandparents continued to feed me even after I moved to San Diego and transferred to SDSU. When I'd come back to Long Beach for visits, my grandfather always insisted on walking me to my car – all the way to my car—when it was time for me to leave. He'd then give me a big hug, followed by a firm handshake and his hilariously awkward palming of money into my hand. My grandparents were seniors on a fixed income and he didn't want my grandmother to know just how much he was subsidizing the contents of my stomach. (At least, that was the explanation I received from, yup, my grandmother.)

Speaking of my grandmother – and I've written about Hurricane Hazel before – she passed away in December 2001, not long after celebrating their 50th wedding anniversary and less than a year before I jumped the broom with Mrs. Bootleg. It hurt my heart to see my grandfather standing by himself at our wedding, but I remember being buoyed that evening by both my wife's resplendency and my grandfather's resiliency. His strength was the foundation for his unrehearsed third act. A widower without his rock, my grandfather would now give his love right back to those who loved him.

The first Thanksgiving and Christmas without him were harder than I thought. But, I can still laugh at the memory of last Thanksgiving. As dinner was about to be served, I stepped up to carve the bird. My grandfather wasn't having it. "You're not ready", he said. "I've carved plenty of meats", I protested meekly. "You're not ready", he repeated. "Go in the living room and watch TV with Jalen." Banished to the kid's section…by the man of the house.

I'm really not sure how long my grandfather was ill, but I remember that he looked demonstrably weaker that day. And, through an odd twist of fate mixed with indelicate timing, I was the only relative in the room when the doctor came in and told my grandfather about the extent of the cancer that was invading his prostate and metastasizing in his bones. That shit don't sneak up on you. But, my grandfather never talked about his pain. He wouldn't want us to worry. He went out the way he wanted.

And, that's SOME comfort, I suppose.

Several times throughout the year, I'd drive up to visit him and we'd sit for hours catching up on life and talking current events or sports or politics. My grandfather was spectacularly pragmatic, but what I wouldn't give to hear his thoughts on the America that so gleefully elected a man who refused to rent his properties to African-Americans and who yearns to see five innocent men of color jailed for a crime they didn't commit when they weren't much older than his 12-year-old great-grandson, Jalen. 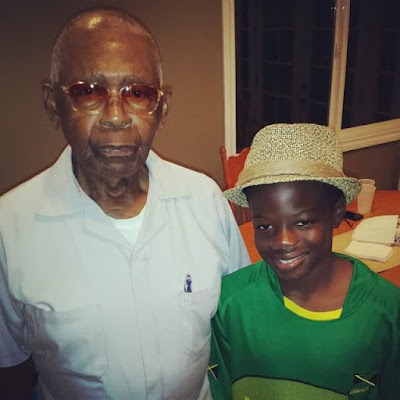 But, like I said, my grandfather never talked about his pain. He proudly served his country, but endured some unspeakable indignities at the hands of his fellow servicemen. His so-called countrymen. The "greatest generation", indeed.

He married a white woman and raised two interracial girls in an America that wasn't quite ready for any of it. Of course, on my penultimate hospital visit with him, he became a one-man Black History Month monologue and talked openly about the time he marched for voting rights in 1949 Mississippi and was shot at for his troubles. Marching for voting rights? Woo, lord, we need him now more than ever.

When I was six-years-old, my grandfather picked my brother and I up from school. I remember it was a very hot day and he brought us cans of 7-Up for the ride home. I finished mine in a millisecond, so my grandfather stopped at the liquor store (heh) and bought me another one. From that day on, up until the last time I visited him in his apartment, he'd always greet me the same way: "Hey, chief! How's it going? There's 7-Up in the refrigerator." I'd long since outgrown the cloying sweetness of soft drinks, but I always accepted his carbonated offering and s-l-o-w-l-y sipped that ice cold can of liquid diabetes.

On the day that my grandfather died, Jalen and I shared a 7-Up in the parking lot of a 7-11 when we returned home to San Diego. I'm planning to have another one tonight around midnight. 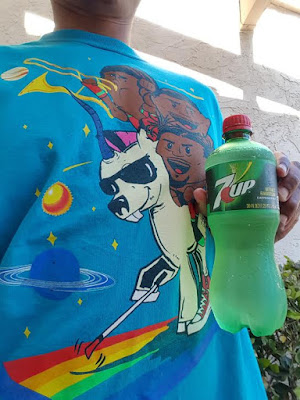