My sincere thanks to this woman right here for inspiring the first TBG post in six months! I'm not even sure if any of you remember "Mad Libs". They were ostensibly meant to make random words funny in an age before blogs and Facebook status updates from your mom. Well, I am NOTHING if not here for obscure references that only eight of you will understand.

Truly, travel ball is ALL of the adjectives. Simultaneously.

…close-knit: My son Jalen started playing travel ball in 2012 at the age of eight. One of the managers in his Little League division put together a team to play in a two-game charity exhibition. The squad lifted its name from a Cleveland Indians minor league affiliate – the Mahoning Valley Scrappers – as Jalen made baseball history by being the first African-American to be ascribed with scrappiness. You see, for generations, this trait was reserved for Lilliputian players of an exclusive…demographic.

With their inherent proximity in age, geography and affection for farts; the boys bonded quickly, holding their own against teams that had been together longer. They played so well, in fact, that the Scrappers entered a tournament in Lakeside later that summer. For those of you who don't know, Lakeside is roughly 30 minutes southeast from Stately Bootleg Manor. In August, the average high temperature is a million goddam degrees. The entire area is nestled between the surface of the sun and the city of Santee – which, in some circles, is better known by its nickname. During the tournament, Mrs. Bootleg and I noticed the conspicuously high ratio of confederate flags to front yards. Fun!

Oh, speaking of my wife. Before the start of this tournament – just after sunrise on a Saturday morning – Mrs. Bootleg had spent the previous evening on a celebratory pub crawl throughout Pacific Beach. At an adorable 4'8", she had passed the limits for her liver (usually a half-glass of wine) early in the evening. She showed up on Saturday in abject agony, in desperate need of the inexplicable alcohol-absorption properties from a really greasy breakfast. Using her feminine wiles and seductively batting her eyelash – from the one eye she could open – my wife convinced the snack bar attendant to start the grill FOUR hours early and prepare ONE double cheeseburger for her…at 8:00 AM.

…cutthroat: I don't harbor any illusions about my son's skill level. He's a decent enough hitter for his age and can help out a team on the mound, behind the plate and at the infield corners. He does have a higher baseball IQ than most kids and, without fail, often wears the filthiest uniform after games. There are better players, there are worse players and I'm fine with wherever J sits on this spectrum. So, it was kind of surprising when the travel ball coach from a team that had just defeated my son's approached me in the parking lot after a game. "Your son did a helluva job behind the plate today", he offered. "We're not supposed to actively recruit players away from other teams, but if your son's interested in moving up, here's my card."

More recently, it would appear that someone passed along my e-mail address to another travel ball program. A few weeks ago, I received an unsolicited missive that read, in part: "We've been watching Jalen for a long time and would love to make him part of our family." In or out of context, that might be the single creepiest sentence I've ever read.

…infuriating: In the summer of 2014, J was swinging the bat as well as he ever has. He was leading off on the second day of a tournament down in Chula Vista when he was hit on the left hand by a fastball that drifted too far inside. The umpire, unfortunately, completely missed the call. He ruled the pitch a ball and ordered Jalen – who’d trotted down to first base – back to home plate. He would ultimately ground out. In the bottom of the first inning, J went in to catch. As he stood right next to the umpire, just after warm-ups and within earshot of everyone, I couldn’t contain myself:

“Which hand, J? Which hand? The right or the left?”

“OK. Let coach know if it starts hurting. And, let that umpire know, too.”

I'm pretty sure it took two – possibly THREE – moms to restrain me.

…inspiring (and not parental negligence AT ALL): Since the posts have been awfully sparse on this lightly-read blog, I'm going to liberally lift from a piece I wrote more than a year ago. If this is your first TBG experience, it's new to you!

J had spent the months since the end of the 2013 Little League season playing on a travel ball squad.  His game had made real improvements -- both at the plate and on the mound -- but, the most noticeable change was a newfound toughness that he lacked in the past.  To be clear, Mrs. Bootleg and I would never dream of pushing our only child beyond his physical or emotional limits.  But, at some point, J needed to start pushing himself.  Mommy and daddy can't do that for him.

Near as I can tell, the turning point occurred in October.  J's travel ball team was playing in a tournament down in the South Bay.  As usual, the start of southern California's autumn meant dry desert winds whistling in from the east and temperatures in the high 80s.  J pitched the second game of the day after an early-morning two-hour tilt.

Since he was six-years-old, Jalen has been susceptible to migraine headaches.  He's been seeing a specialist for the past several months and while we've seen improvement, warm weather and physical exertion -- together -- are two of J's biggest triggers.  His symptoms are easy to spot: glassy eyes, sluggishness, and slightly slurred speech.  After pitching the top of the first inning, I could see the first two from the bleachers.  I spoke to J briefly between innings and his barely coherent mumbling confirmed the third.

We notified his coach, but Jalen insisted he could keep pitching. As I paced nervously from foul pole to foul pole, J pitched five innings -- giving in to gravity as he collapsed on the bench between innings and dragging himself back to the mound with an internal tank that teetered towards empty.  And, after figuratively pitching his guts out for five innings, he did so literally for pretty much the entirety of the sixth while I relayed game updates to him from the visitor’s side of the wall in the bathroom stall.

See? Totally NOT worth a call to Child Protective Services, you guys! 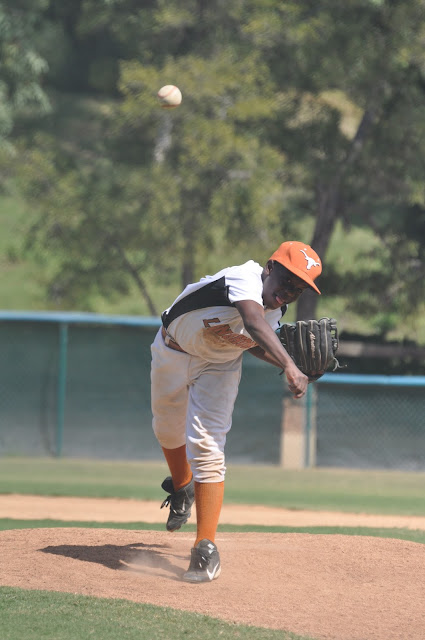 …antagonistic: With all due respect to the kids and coaches, the adults on the "audience" side of the fence sometimes contribute ALL the entertainment. At a tournament last summer, the opposing manager was especially chirpy, loudly complaining to the umpires about any and everything. One of the OTHER parents on my son's team essentially shouted back "sit down and shut up". Of course, the opposing manager thought it was ME who called him out, so he – understandably – threatened to climb the fence and kick my ass in front of two dozen 10-year-olds. Here's a recreation of the scene in the stands with actors hired to play the parts of me and my wife.

During a tournament a few months later, my son's team was losing its grip on a late lead. With the winning run on first base, the batter sent one to the wall. The runner on first rounded third with a full head of steam and absolutely obliterated our catcher. Here's a recreation of the scene on the field with actors hired to play the parts of our valiant catcher and the sniveling little sh*t who instigated EVERYTHING. From there, it was ON and CRACKIN' (as the kids used to say…or, do they still say it?...whatever) Our coaches stormed the field in search of an opposing coach to serve as the proxy for the ass-whipping their prepubescent baserunner so richly deserved. Our team's parents – mostly the moms, as I remember—were wild-eyed and collectively pantomiming the universal posture for "parking lot…unless you a PUNK".

…offensive…?: J’s team once played against an all-Hispanic 10U squad from Los Angeles. The team was called – I am not making this up – the "Frijoleros". The nickname’s definition, as lifted from Urban Dictionary.com, is "[R]acist term applied to Mexican (and Mexican-American) residents of the US. Translates roughly as 'one who prepares beans.'" I assume this insignificant travel ball blurb has already been used by Fox News in their rock-solid defense of Donald Trump by the time you've finished this sentence.

…confusing: Try to follow along, IF YOU CAN. Jalen currently plays for the San Diego Longhorns Baseball Club – BLACK. (I know, right?) Not to be confused with the San Diego Longhorns Baseball Club – ORANGE. Ironically, the ORANGE team is considered the classic collection of Arnold Jacksons while the BLACK team is essentially Sam McKinney. Previously, J played for the Scrappers and then the Aztecs. The Aztecs name was aped from the mascot of San Diego State University where my son’s manager played baseball collegiately under Major League Baseball Hall of Famer Tony Gwynn. And, J's manager? He’s now the Longhorns BLACK skipper after parting ways with the Aztecs last summer. The Longhorns, of course, take their name from the ubiquitous University of Texas team. BUT, word is that the Longhorns (the college) are cracking down on unauthorized use of their name and logo, so the current rumor around town is that J's team will STOP violating the Longhorns' trademarks and START violating the Aztecs' trademarks. Again. And, the Longhorns. Apparently. Again.

…fun: Some of the ballparks that occasionally host tournaments serve an assortment of craft beers on tap! And, here are some great non-beer-related things:

J's had some fantastic coaches over the past few years. Coach Andy was the first to give him an opportunity to play at the competitive travel ball level while Andy's assistant Clark taught us all the different ways an entire case of Natural Light could be smuggled into a dugout. Jalen's received hitting lessons from former minor league all star Tracy Sanders and pitching lessons from 24-year Major League reliever Jesse Orosco.

My son's coach for the past two-plus years has been Brandon Decker. J will never have a better coach, even though – as most of San Diego County knows – I did coach my son's team to back-to-back second place finishes in the Rancho Bernardo Little League Minors Division tournament AND guided the 2014 9/10 All Star team to third place in the entire district. (Well, NOW you know. Jerks.) Decker has patience in spades and teaches the game from the perspective of someone who learned from a Hall of Famer. His players would run through a brick wall for him – with J leading the way.

Travel ball parents are a different breed, baby. One – ONE! – of our moms is tasked with running the administration of a travel ball team. In no particular order, she collects monthly dues, balances the books, makes and distributes the schedule, tracks down lost caps, replaces outgrown jerseys, sends out emails...oh, and her husband brings Karl Strauss Red Trolley Ale to the games, so they're BOTH valuable! There's the one-armed man who brings his work with him to every game, but stops everything when his son's on the mound, confounding kids with an assortment of old-man drop balls. And, I can't forget the parents of J's hyper-polite teammate who have opened their home to my son, treated him like family and introduced him to new and unusual things, such as cooked carrots.

The travel ball experience wouldn't be possible without Mrs. Bootleg and Jalen, obviously. And, while my wife graciously drives us home from those ballparks that (over)serve craft beer, it's our son who has brought both of us along on this wonderful ride. 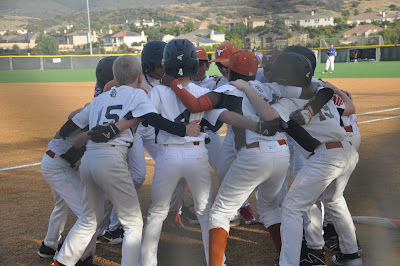