Me?!  I think a BETTER question is where the hell have YOU been?


It's only been two, three, four, five, six months since my last post.  OK, six-and-a-HALF months.  But, I have a good excuse!  It's a LONG story.  Longer than the time I almost died.  Longer than one of my travel diaries.  It would make for a GREAT multi-part blog post, which is to say...that's all I can say.


...oral surgery!  Last December, I underwent a two-hour grafting procedure along my gum line.  The day before, I met with my dentist -- an Indian woman who I've been seeing for almost 15 years.  As she cautioned me about the short-term limitations I'd endure immediately after the surgery, she dropped this bit of inadvertent, heavily-accented awesome:


During the procedure, the local anesthetic wore off about halfway through.  As my dentist explained:


"We will give you another dose, but we can't stop the procedure.  We've already exposed the cadaver tissue.  I'm sorry, but you're going to be very uncomfortable for a few minutes." 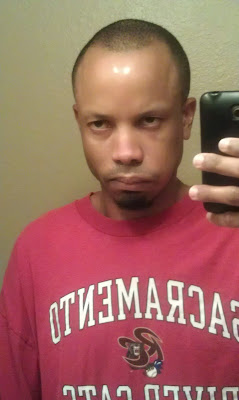 HOW uncomfortable?  Take your gum line and physically tear it away from your teeth.  That's not a hypothetical, kids.  I couldn't eat solid food for almost six weeks and my weight dropped from 175 lbs. on December 5th (the day of the surgery) to 151 lbs. in mid-January.  On the plus side, only HALF of my face turned into a grotesque mess!  Look...I'm not saying I agree with the insane, homicidal tendencies of Two-Face. But, now I understand how super-villains get their start.


...Little League baseball!  My last TBG post was a recap of the start of my 9(!)-year-old son's spring season.  Believe it or not, our team made it to the championship game, but fell two runs and one inning short from winning it all.  It was the most fun I've ever had coaching one of Jalen's teams. 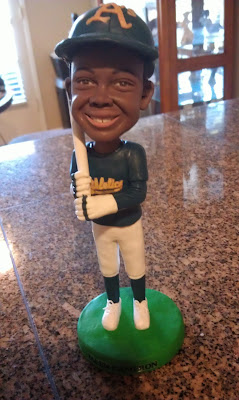 Ooh, before I forget, J would like you ALL to know that, as a hitter, he led our team in walks AND as a pitcher, he was tied for the team lead in wins.  Trust me...he kept track.  Meticulously.  He even made the postseason 10U All Stars.  However, J's stubborn refusal to bend the brim of his baseball caps legitimately undermines ALL of his accomplishments.


Unfortunately, Jalen's all-star run coincided with my favorite TBG time of the year: the San Diego Fair.  For four straight weeks; J's team was either practicing, scrimmaging or playing a game.  And, for four straight weeks; I was missing out on deep-fried cookie dough, Krispy Kreme sloppy joes and waffle dogs.  (Welcome, new readers!  Yes, I used "and" instead of "or" two sentences ago.  Y'see...the food at the San Diego Fair is kind of a big deal around this lightly-read blog.  Get caught up!  We'll wait!)


Up until two weeks ago!  M'man Coach Andy called for one of our infrequent youth baseball gossip sessions. But, before we could begin sharing our scouting reports on up-and-coming eight-year-olds or commence with yet another mock draft of best-looking mothers in our Little League ("Why do you ALWAYS select your wife in the first round, Aaron?", Andy sometimes often ALWAYS taunts.) my mind was about to be blown:


"Have you seen the new ice cream sandwiches at Baron's?  Chocolate chip cookies with candied bacon ice cream. They are..."


I don't remember much of our conversation after Andy strung together "candied" and "bacon" and "ice cream", consecutively.  I do remember his comment left under a picture I posted to my Facebook page of the actual ice cream sandwich:


The ice cream sandwiches are from Coolhaus -- an outfit that began as a gourmet food truck nearly five years ago in Los Angeles.  Today, they have nearly a dozen trucks dotting LA, New York City, Austin and Miami, along with storefronts in Pasadena and Culver City.  They've recently introduced a pre-packaged line of their signature high-end ice cream sandwiches nationwide.


Let's see if I still remember how to write these. 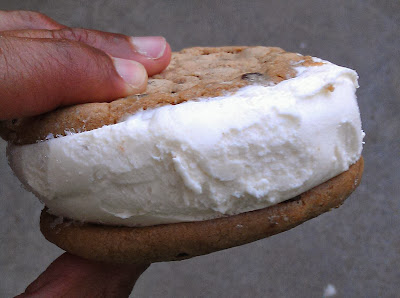 Chocolate Chip Cookie with Brown Butter Candied Bacon Ice Cream -- The candied bacon component ensured that this would be my first Coolhaus choice.  As obnoxiously ubiquitous as bacon has become, it doesn't get nearly enough love for its versatility in desserts.  Surprisingly, though, it's the cookie that's the best thing here.  Brown sugar is one of my favorite flavors -- whether we're talking gastronomic or marital(!) -- and the cookie carries a sweet, but tempered richness.  The soft and chewy texture is markedly better than your typical convenience store cookie sandwich, as well.  The ice cream is solid and it's a damn fine accompaniment with the cookies, but the "perfect bite" of sweet and savory, brown sugar and bacon only occurred in every third our fourth chomp.  The candied bacon was good enough to stand on its own and I found myself wishing there was more of it here.  Grade: 4 (out of 5) 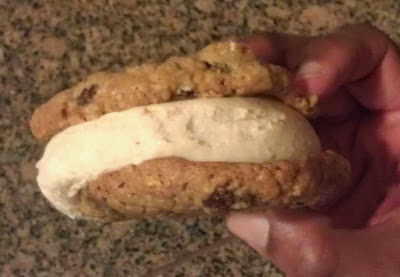 Oatmeal Raisin Cookie with Baked Apple Pie Ice Cream -- In the interest of full disclosure, I should come clean and admit that oatmeal cookies are my favorite cookies in the whole wide world.  Similarly, whenever I'm out to eat, my go-to dessert is pretty much anything with warm apples.  (Longtime readers know Mrs. Bootleg prefers crème brûlée or tiramisu.  No, I don't know why she hates America.)  Anywho...this was pretty much magnificent in every way.  The mouthfeel of the chewy, brown sugar/buttery oats belied its previous residency in a commercial freezer.  Paired with the not-too-tart, not-too-sweet apples from the cinnamon-dusted ice cream, this one hit all of Aaron's taste targets.  500 out of 5? Oh, I'mma 'bout to go there...   Grade: 500 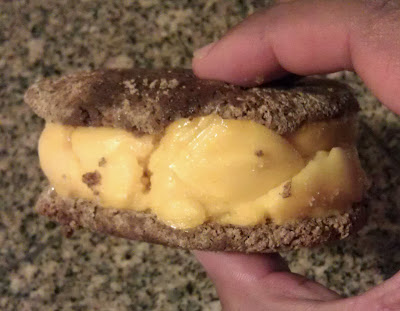 Vegan Ginger Molasses Cookie with Mango Saffron Sorbet -- Prepare your "shocked n' amazed" faces, people.  This one's an acquired taste.  My wife would have NONE of this tomfoolery with her taste buds.  Here's a 10-second reenactment of her 10-minute reaction after taking one -- and only one -- bite.  Separately, these aren't my favorite flavors, but together...they kinda-sorta work.  The spiciness of the cookie is cut way back by the sorbet.  The taste of mango is strong, but the ginger and molasses linger at the back end of each bite.  The end result is akin to a palate cleanser with a bit of a kick.   Grade: 2.5 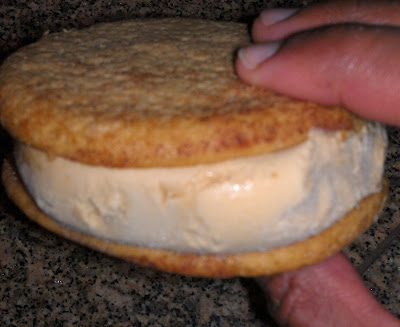 Snickerdoodle Cookie with Salted Caramel Ice Cream -- For the entirety of his young life, my son would only eat chocolate chip cookies.  WITHOUT walnuts.  Weirdo.  If we're including store-bought, he'd ignore Oreos, Newtons and Nutter Butters in favor of Chips Ahoy, Chips Deluxe and Famous Amos.  Recently, however, he's been seen dating cookies outside his taste.  Snickerdoodles are his current infatuation and the Coolhaus version is soo-POIB.  The cinnamon/sugar balance is perfect and the granules are a subtly outstanding textural contrast with the ice cream.  However, I wish the ice cream's saltier notes carried over.  The deep caramel flavor and sweetness from the cookies could've used a few salty swipes, but I suppose I'm picking nits.  My son obliterated the half I gave him.  I think Coolhaus has comfortably captured the pre-adolescent African-American market.  Grade: 4.5 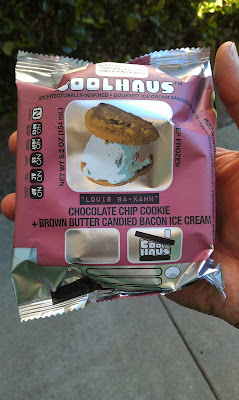