Rancho Bernardo is a small community tucked neatly inside the top of San Diego.  The always-accurate Wikipedia refers to it as "...an upscale master-planned community in [San Diego's] northern hills...".


But, who can argue with an adjective like "upscale" when our neighborhood is home to a three-stars-on-Yelp Chinese buffet and a reputable business endorsed by Robin Leach?

Depending on your source, Rancho Bernardo's population is around 40,000.  This represents roughly 3% of San Diego's 1.3 million sun-drenched denizens.  And, our region never seemed smaller than on February 25, 2010.


17-year-old Chelsea King -- a high school senior from nearby Poway High School -- went for a training run at Rancho Bernardo Community Park along its well-known, trees-and-brush-hidden trails.  Tragically, she never came home.  Her disappearance led to the formation of local search parties -- comprised of both her peers and complete strangers -- that organized just down the hill from my house.  Five agonizing days passed before her body was found.  The victim of a horrific sexual assault was murdered 1 1/2 miles from my front door.


Rancho Bernardo Community Park is also home to our local Little League's ball fields.  Days after Chelsea King's body was found, the park hosted Little League's opening day ceremonies.  I have no doubt that organizers wrestled with how to respectfully pay tribute to Chelsea in front of hundreds of children -- some as young as five-years-old -- without creating a pre-pubescent panic.  I remember that the ceremony was understandably brief, but moving.  My son Jalen asked about the large "CK" initials that were drawn on the infield dirt, but my awkward response was lost on his ears amid calls of "Play ball!"


Since then, I've spent an ungodly number of hours at that park.  I've watched Jalen attempt to field everyone else's position in t-ball.  I coached him when he moved up to hitting off of the pitching machine.  I managed him in this, his first year of live pitching.


Rancho Bernardo's Little League is a community all its own.  This is why I wasn't surprised to receive a text message from my son's Fall 2010 coach.  We regularly practiced together with our sons -- and several other fathers and sons -- on whichever open field could accommodate us on hastily-selected Sunday mornings or holiday afternoons or early December evenings.  J's old coach asked if he'd be interested in playing in a charity tournament.


Last month, the second annual Home Run for Chelsea event was held at ball fields across San Diego County benefitting the Chelsea's Light Foundation.  Jalen reluctantly donned the uniform of the Cleveland Indians' short-season single-A minor league affiliate -- the Scrappers.  As his coach wryly remarked, "It's a good name for a kids' team."  Without missing a beat, Jalen replied, "Yeah, but, so is Rivercats!  And, RockHounds!"  (You'd have to be well-versed on the Oakland Athletics' minor league teams to get that.  It's probably best if you just move on to the next paragraph.)


The tournament officials farmed us out to Encinitas -- a coastal community that sits about 25 miles northwest of Rancho Bernardo.  There was some grumbling from the adults -- naturally -- but, I thought it'd be fun to play on a different field and Jalen was excited about the prospect of a real "road game".


For the first time in what seemed like forever, I wouldn't be coaching my son.  I hadn't been just a spectator at one of Jalen's games since Mrs. Bootleg literally banned me from watching from the same side of the field as her.  According to my wife, I'm too obnoxious, too intense and occasionally try to coach my son from the stands.  Pfft...balderdash.  Besides, if Jalen would just LISTEN TO ME...


Seated down the third base line, my wife and I watched Jalen warm up with his teammates.  This was the only uncomfortable part of the event for me.  It was all I could do to stop from grabbing my glove (which I smuggled inside Jalen's bat bag), run onto the field and warm up my son.  Part of me was hoping that he'd see my glove in his bag and ask, on his own, for a little catch with his old man.  And, then, maybe the manager would say, "Hey, Aaron...we need someone to coach first base. You interested?"  Clearly, my evil scheming and nefarious planning need polish.


Before the 9:00 AM games began, the mother of Chelsea King gave a short speech in front of the gathered players and parents.  I didn't really need such a nudge on what was already an emotional morning, but her words pushed my tear ducts past their natural capacity.  It was Mrs. Bootleg keeping the stiff upper lip for the family and her "Oh, here we go..." roll of the eyes at the sight of my tears was, admittedly, magnificent. 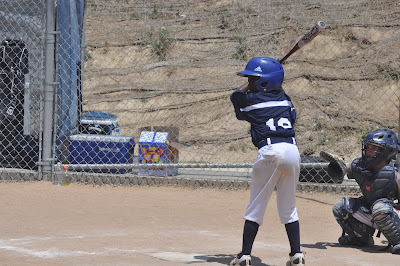 Jalen's team played two games that day.  The first was against a travel ball squad that was clearly the stiffest competition any of our kids had faced to date.  J struck out in his first two at bats on letter high fastballs that I doubt he saw.  Jalen pitched the fifth inning, tasked with protecting a 3-2 lead.  Unfortunately, J's appearance was right in the middle of his worst Little League pitching stretch of the season.  He walked five and gave up four runs in just 2/3 of an inning -- the two outs recorded on a spectacular diving catch by the shortstop and a baserunner who crashed into the same shortstop just as he was fielding another ball.  My son had as much success fighting back tears as I did earlier in the day. 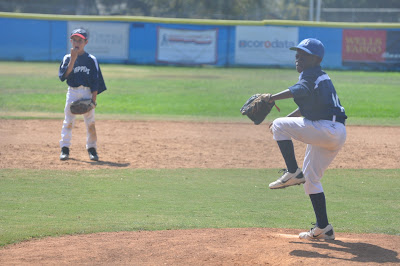 In the sixth and final inning, though, the Scrappers (ugh) rallied and Jalen drove in the tying run.  With the two-hour time limit reached, the game finished in a 6-6 tie.  The second game followed 15 minutes later.  It was mostly an unwatchable slog of ball four-after-ball four between two tired teams with a discernible difference in ability.  The Scrappers won 18-8 and Jalen is still talking about his bases-clearing three-run triple in the first inning.


I didn't spend much time with Mrs. Bootleg during either game.  When I'm managing my son, I'm a tightly-wound, mocha brown bundle of nerves who receives repeated reprimands from the umpire to quit pacing and stay inside the first base coach's box.  It's hard to sit still while rooting for Jalen.  It's surprisingly harder to sit still when you're rooting for a community. 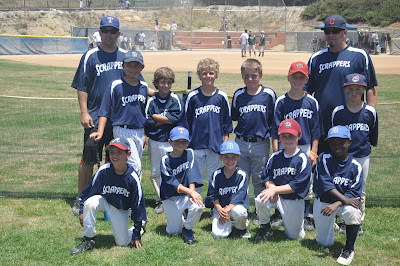