The LL Chronicles #26: Six Games Into the Season...


I've often said that it's the adults who make Little League baseball infinitely more difficult than the kids. So, you'd better believe I'm proud to announce MY contribution to the usual chaos and confusion.  As the 2013 Little League season approached, I had to determine where my nine-year-old son Jalen would play.


J could stay in the 8-10-year-old division called "Farm".  This is where he played last year, holding his own with the stick and as a regular pitcher.  Or, he could move up to the 9-11-year-old level called "Minors" -- ostensibly a more competitive division that sits one spot below Little League's apex echelon, "Majors".  I hemmed and hawed in the weeks leading up to spring sign-ups and beyond, listing both divisions on J's paperwork and wrecking havoc on the league's aging, TRS-80-supported player database.


After receiving unsolicited counsel from several other managers -- who crafted their one-size-fits-all advice around the same weather-worn opening line, "If he was MY son..." followed by two seconds of silence to presumably build dramatic effect before dispensing their predictable advice after the ellipse -- I opted to bring Jalen up to Minors. 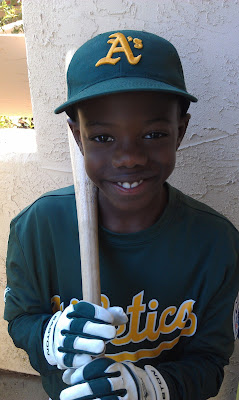 Tryouts were held in mid-January and the player draft was two weeks later.  My Athletics team (yes, AGAIN) looked especially young on paper -- with four 9-year-olds and just one 11-year-old. But, we appeared to offer some decent depth in both the lineup and pitching staff; albeit without any of the "man-amongst-boys" behemoths whose talent belies their birth certificates.


We practiced throughout the month of February and after an unusually-scheduled bye on Little League Opening Day, we played our first game:


"12-4 loss in Little League opener, highlighted by my son seeing a curveball for 1st time. Ended as hilariously & tearfully as you'd expect." -- from my Twitter feed, March 9


I handed the opening starting pitching assignment to our oldest, most experienced player -- a tall, lanky 11-year-old named Jordan. He initially struggled with his control, but settled down to strike out five in a row at one point.  He left with a 3-1 lead.  After telling him that he wouldn't be pitching earlier in the evening, I changed my mind and brought Jalen into the game.  When the inning ended, we were suddenly down 6-3.


J only gave up one hard hit ball in the inning.  Everything else could be laid at the feet (...and through the legs...and under the gloves) of our Vaudevillian defense.  And, it wasn't entirely errors.  Here's a quick in-game conversation between me and my third baseman:


Me: "Seth! The bases are loaded. If it comes to you, just step on third!"


[The very...next...pitch is a groundball to third base.]


Rest of Team: [Audible, but indecipherable cacophony of criticism directed at Seth. Constructive, I presume.]


Later in the game, we would run ourselves out of not one, but TWO separate innings when my baserunners lost track of the number of outs.  Even the umpires got in on the act when one of my players avoided a tag at home plate only to be called out.


Me: "Where did the catcher tag him?"


Obnoxious parent of player on the other team: [From behind the backstop] "THE RUNNER WAS OUT OF THE BASELINE!"


Umpire: "Uh...the runner was out of the baseline."


Trailing by one run as we entered the bottom of the sixth and final inning, we were fortunate to have the top of our batting order coming up.  My leadoff hitter is a thickly-built 10-year-old catcher straight out of the Moneyball methodology.  He started us off by tomahawking an opposite-field single to right.  Up next was Bennett -- a talented 9-year-old who skipped the Farm level altogether.  He's a terrific little hitter whose concentration needs an occasional nudge.


Jesus!  True to his word, last rites rang off the left field wall as Bennett tripled home his excruciatingly s-l-o-w footed teammate to tie the game.  Bennett scored on a check-swing infield dribbler to win it.  To his credit, Jalen led the spontaneous walk-off celebration and waited until we'd ALMOST gotten back to the car before expressing his selfish lament.  So...progress. 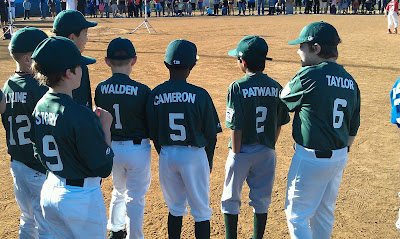 
"16-11 loss in Little League. Didn't let fact we were missing 2 of our best players stop me from yelling at kids over teams' lack of effort!" -- from Twitter, March 16


My 10-year-old catcher who runs with a pair of pianos strapped to his back?  Out with shin splints, natch.  My stone-faced clean-up hitter?  In-season(!) family vacation.  Despite the losses on offense, we were matching run-for-run with one of the better teams in our division -- which made our half-assed effort in the field and on the basepaths even more inexcusable.


I've been managing in Little League long enough to expect these games once per season.  They're immediately followed by a postgame meeting in which I unleash a little kid-friendly Jim Leyland (NSFW!)  Up until now, my teams had been blown out in these effort-free affairs.  On this day, a win was within our reach, so I made my speech in the middle of the game, between innings.  It included ALL the classic lyrics, like...


And, we still lost the game.  Next time, I'll auto-tune the chorus.


This one STUNG.  And, the pain was exacerbated two days later by the father of one of my players.  In a long, rambling e-mail, he asked if I could make the game "more fun" for his son.  Somewhere in chapter 16 of his missive, he not-so-subtly mentioned that he previously played minor league baseball and helpfully offered up the same basic pointers ("...have the hitters rotate their hips..." and "...get the head of the bat in front of the plate...") that EVERY youth coach knows and parrots.  The publicity blurb on the back of this e-mail's imaginary book jacket would be "THE MOST CONDESCENDING READ OF THE YEAR!"


Fortunately, I trashed my original reply ("Don't worry. Your son's got the same chance of making the Major Leagues as you.") and respectfully invited Crash Davis to come out to a practice and dispense his "fun" blend of pedantic wisdom and "Baseball Annie" anecdotes to ALL of the kids.  It's been 10 days. I'm still waiting for his response.


"Little League team wins 14-4, bouncing back from worst loss ever. Per agreement, I'm returning players' Friday lunch money to each of them." -- from Twitter, March 21


Earlier this month, Jalen and I were having breakfast before I took him to school.  The conversation centered on catching and my son's newfound affinity for the position.


Jalen: "Do you think I'll get most of the starts at catcher when the season starts?"


In the past, I've been able to honestly assess my son's baseball shortcomings and he'd respond with mock indignation or a playful "Hey!" before trying -- almost always successfully -- to tackle my frail, emaciated frame to the ground.  This time, however, his response wasn't what I'd call "playful".


It's been nearly a month and I still feel awful about it.  The worst part is that I think he was less hurt by the criticism than by the fact it came from his greatest baseball advocate.  I immediately backpedalled by belatedly -- and clumsily -- adding context to my comment:


"Well, J...y'know...you've gotta work on blocking balls in the dirt and...y'know, you gotta have a quick release back there...I mean, it's a tough position.  And, I like you more at shortstop.  I thought you LIKED playing shortstop?  DON'T YOU LIKE SHORTSTOP?!"


Fortunately, I had enough flop sweat left over to marinate the crow my son would serve me once the season began.  In our second game, Jalen -- who'd stayed home from school with a cold the day before -- ended up catching four of the six innings and tagged a runner out at home.  In our third game, he threw out a runner at third base and in this 14-4 win, he threw out a runner trying to steal second.


After six games, J's played more innings at the position than anyone on the team.


"Little League team scored 21 runs today, but the big story was son's reaction to getting stung by bee for 1st time." -- from Twitter, March 23