I don't know if my team is any good this year.


Baseball managers are expected to speak in platitudes instead of trafficking in truth; but I drafted the 11 boys who'll be wearing Athletics green and gold through the first week of June.  I drafted the tall, lanky and bespectacled lad who earnestly tried to stop a groundball with his foot, instead of his glove, at a recent practice.  I drafted the short, surly and bespectacled child who does not speak.  It's the damndest thing, but I assume it's a tribute to "Calvin" from one of the most criminally underrated movies in cinematic history.  I drafted the hustling, bust-his-butt, bespectacled kid who'd never played baseball before this...hey, wait.

I DRAFTED THREE KIDS WHO WEAR GLASSES.  Oh, don't look at me like that.  I wore glasses for years before Lasik surgery.  It's just that in 2014, ballplayers who wear glasses are exceedingly rare and only ironically feted.  30 years ago, they were some of the coolest baseball cards in the pack.  Isn't that right, Mike, Reggie and Mike?

Our practices throughout the month of February were -- to put it politely -- "unpolished".  I'd been spoiled by the team I managed last year.  We weren't the most talented squad, but most of the kids' collective baseball acumen belied their ages, so the less-experienced players had on-field examples to follow.  We finished the regular season just 8-7-1, but hit our stride in the playoffs before losing in the championship game.  That team was led by an 11-year-old named Jordan.

Jordan -- who bore more than a passing resemblance to a certain child actor --  batted third or fourth for me all season.  He pitched nearly 30% of our team's total innings played -- even after missing a week with a strained bicep that may OR MAY NOT have been caused by overusage.*

After our first practice, I took him aside and asked him to take on a leadership role.  He was the oldest player on the team and accepted my offer with a respectful "Yes, coach."  Much to my surprise, he took his unofficial captaincy seriously -- mentoring the less-experienced players and reigning in the raucous dugout when the 9 and 10-year-olds in it were acting like 9 and 10-year-olds.

* -- In a transparent attempt to distract you from my ALLEGED abuse of an underage arm, here's an unrelated link that bares NO similarity to the situation described above. None.

My son Jalen turned 10 in February.  And, whether I like it or not, I'm losing my "little boy".  He decided to grow his hair out last summer, much to the consternation of his father who was raised in a Marine Corps household.  His taste in music is wildly eclectic -- like my wife's -- circuitously meandering from Motown to obnoxious pop to rap acts that have passed me by.**  Earlier this week, after arriving at school, Jalen leaned forward from the backseat and told me, "OK, dad, let's get this over with: I love you. Now, hug me."  Last year, he established no less than 10 feet of distance must separate us when I'm walking him to class.

** -- If I told you that Jalen had the CLEAN version on his iPod, you'd believe me, right?  PLEASE DON'T CALL CPS.

J has spent the months since the end of his last Little League season playing on a travel ball squad.  His game has made real improvements -- both at the plate and on the mound -- but, the most noticeable change is a newfound toughness that he lacked in the past.  To be clear, Mrs. Bootleg and I would never dream of pushing our only child beyond his physical or emotional limits.  But, at some point, J needed to start pushing himself.  Mommy and daddy can't do that for him.

Near as I can tell, the turning point occurred last October.  J's travel ball team was playing in a tournament down in Chula Vista.  As usual, the start of southern California's autumn meant dry desert winds whistling in from the east and temperatures in the high 80s.  J pitched the second game of the day after an early-morning two-hour tilt. 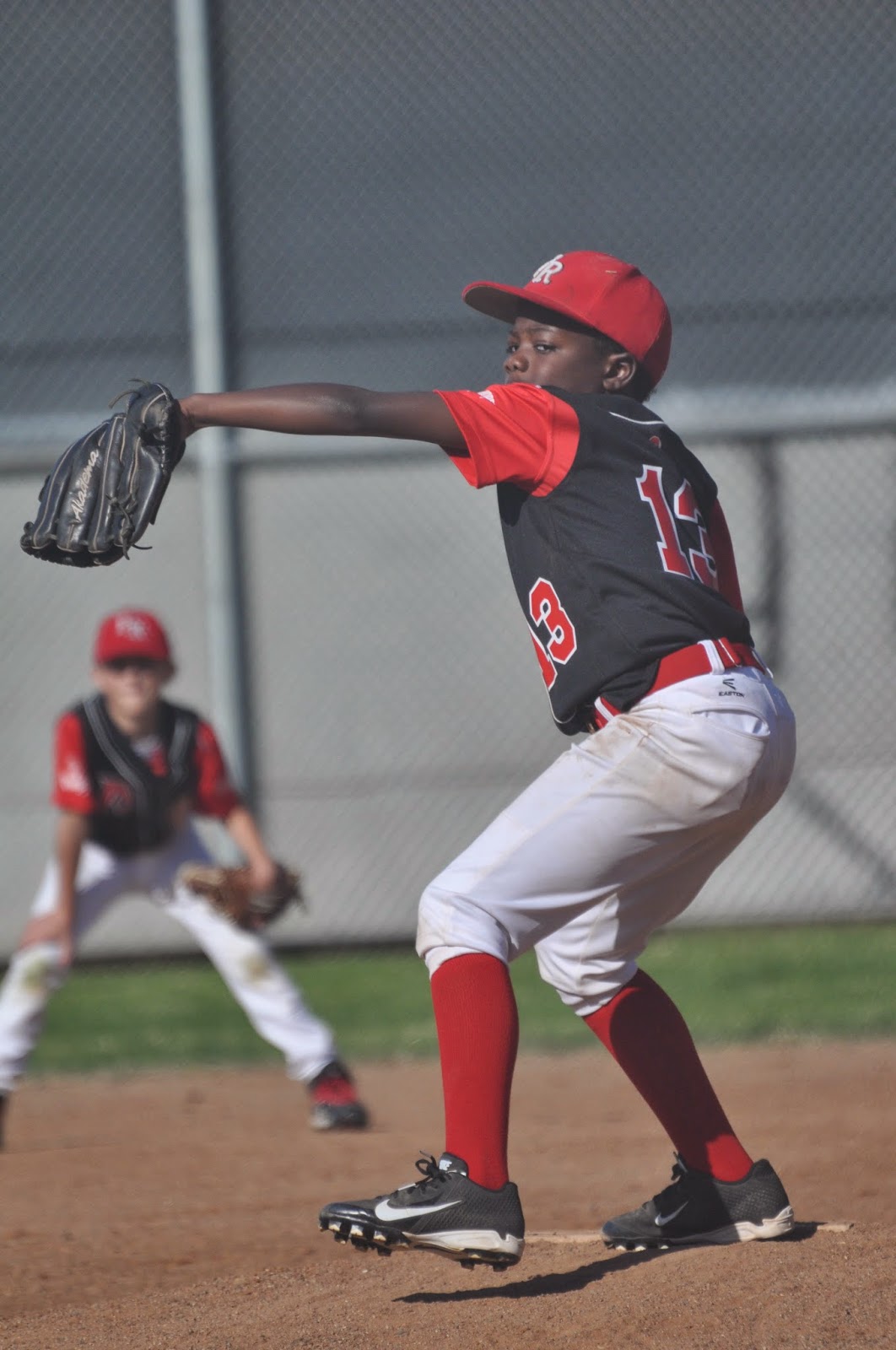 Since he was six-years-old, Jalen has been susceptible to migraine headaches.  He's been seeing a specialist for the past several months and while we've seen improvement, warm weather and physical exertion -- together -- are two of J's biggest triggers.  His symptoms are easy to spot: glassy eyes, sluggishness, slightly slurred speech.  After pitching the top of the first inning, I could see two of three from the bleachers.  I spoke to J briefly between innings and his barely coherent mumbling confirmed the third.

We notified his coach, but Jalen insisted he could keep pitching.  As I paced nervously from foul pole to foul pole, J pitched five innings -- giving in to gravity as he collapsed on the bench between innings and dragging himself back to the mound with an internal tank that teetered towards empty.  And, after figuratively pitching his guts out for five innings, he did so literally for pretty much the entirety of the sixth.  So, how could I not make history with this kid?


Wearing gleaming white cleats and an unsanctioned-by-Little League fitted A's cap with a flat yellow brim (grumble), Jalen took the mound last Thursday evening against the White Sox.  He retired the first two batters before his friend Daniel stepped to the plate.  Daniel is one of the bigger and stronger kids in our division.  He walloped a grand slam home run over the left field wall in All Stars last summer and two years ago, he hit a bomb off Jalen that ricocheted off the top of the fence.

J fretted all week over how to pitch to Daniel, then proceeded to hang an 0-1 change-up.  Daniel hit a sky-high fly ball to centerfield.  I'd stationed a small kid named Nicholas out there.  Throughout the entire month of February, he might've caught two balls that were hit or thrown to him.  So, OF COURSE, he calmly sticks up his glove and pulls this one down.  Nicholas sprinted back to the dugout, beating half the team in and wearing an ear-to-ear grin.

Jalen singled to lead off the bottom of the first, stole second and scored on two of those ubiquitous Little League baseball overthrows.  He went back out to the mound, striking out two in the second inning and three in the third.  After three innings, we led 9-0 and eventually won 14-5.


I still don't know if my team is any good this year.  My coaches and I will turn these kids into better ballplayers, if nothing else.  It's still early and there's a long season ahead.

It's getting late for me and my "little boy", though.


I guess I need to get used to giving him the ball.

It's also possible that your son has been following in your LBC roots since he was six, Cam.

HA! This WOULD explain his perpetual cravings for convenience store snack foods.