In conjunction with the start of Major League Baseball's postseason, Taco Bell introduced a new ad campaign for their XXL Chalupa. Most of you have probably seen the spot featuring New York Yankees manager Joe Girardi and closer Mariano Rivera:

As with everything else in the internet age, America couldn't wait to share its collective opinion of this commercial with the world. My unsophisticated five-minute web search has determined that you guys think (1) Rivera is a terrible actor and (2) the staid Yankees tradition was somehow "above" shilling for cheap eats.

Of course, the second point couldn't be more preposterous. As for the Panama-born Rivera, it seems a little silly to criticize the stiffly-delivered English of someone who doesn't use it as his primary language.

Since my marketing degree from San Diego State University is valid for a few more weeks, I'll offer that – by the admittedly low-standard of celebrity advertisements – Taco Bell's is reasonably effective. The celebrity should never overshadow the product. Fortunately, the casual recognition gap between shortstop Derek Jeter and the rest of the team's current roster is undeniably wide. By my unofficial stopwatch, Girardi and Rivera are onscreen for less than half of the 30-second runtime.

The commercial hits its target audience (men) and gently twists our inherent competitive dials by implying weakness if you can't finish a XXL Chalupa.

"But, I'd NEVER eat at Taco Bell", you rudely respond. And, since this is ostensibly a super-size version of a long-established menu item, you're NOT in the target audience, I'd politely retort.

For those of you who aren't sold on my half-ass advertisement analysis, let's be honest: this isn't anywhere NEAR the worst Taco Bell commercials featuring professional athletes.

Not long after Shaquille O'Neal signed a multi-million dollar free agent contract with the Los Angeles Lakers – and a few months before unleashing Steel on an unsuspecting public – he teamed with Taco Bell for the infamous "Taco Neck" ad campaign:

In both cases, there's too much celebrity, while the products are an afterthought.

Now, before y'all can say the same about this review, let's get into it. From Taco Bell's website: 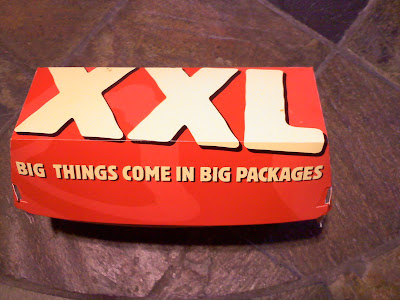 After opening the enormous box, the first thing I noticed was the Chalupa shell, itself. It curves upward at the ends which make the XXL Chalupa look like a chewy refugee boat. It also leads to a challenging first bite, as deep-fried crispiness fills your mouth well before the filling can find its way in. 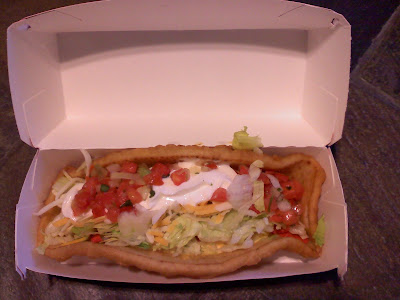 Beyond that, if you've ever indulged with multiple Chalupas in a single sitting, then you won't be overly surprised by the size here. The ground beef and nacho cheese sauce is the same as it always was – solid enough, if overly familiar. The shredded cheeses and fiesta salsa make for a decent blend of tastes and textures with the greasy pillow enveloping the ingredients within.

The notion that it's too big is a bit of a fallacy, though. I ordered one along with a platter of Volcano Nachos and – in a fit of TBGluttony – crushed them both. That's gotta be the equivalent of a 10-inning complete game, Girardi.

You know the Yankees haven't had an emaciated innings-eater like me in their rotation for 20 years.

This isn't even the worst *Mariano Rivera* commercial I've seen.

Out here they used to play one for Continental Airlines. For some reason, all the Yankees are working menial jobs around the stadium and Rivera is a popcorn vendor.

The humor seems to come from his heavily-accented "PAH-corn! Geh yer PAH-corn, here!"

As always, your production quality is second to none. When I grow up and learn how to use computers, I'm gonna have value add-ons, too.

@Lew -- Pfft. The miracle of YouTube's "embed" feature and a cheap cell phone camera has only brought this lightly-read blog into the late 20th century. I'll need more than that to bring TBG's technology past 1999.

@Jon -- HA! I looked all over for that Continental commercial. I've seen it a million times on the YES Network (before Delta apparently became the team's "official" airline.) Nothing worse than an unsuccessful YouTube quest.

1) I was giddy to see you reviewed this. I tried it but substituted chicken for beef and baja sauce for the melted "cheese". It was delicious.
2) Barkley, unfunny? Usually our sense of humor mesh, but really? You don't like the Round Mound of Rebound? My top three Chuck Wagon quotes:
A) (In response to a question about what he would do if he were governor of Alabama, as he's often said he'd run) "Make education my priority. We're as low as you can get, we're 48th across the board in education". (Someone mentions to him that there are 50 states) "I know, but Mississippi and Arkansas are not going anywhere."
B) I can't get the entire quote, but when Peter Jennings had interviewed either Saddam Hussein or Osama bin Laden Barkley was incredulous that Jennings didn't shoot them.
C) In response to his mother saying that he shouldn't be a Republican because they only care about rich people: "Mama, I'm rich".

you might be better off with "funny but not in the way he intended".

and pascual is no melido. melido gives you innings. like jose dejesus. and shonn greene. he just needs to pitch more, m-e-l-i-d-o-p-i-t-c-h-m-o-r-e and that's what he needs to do, pitch more.

at least that was how i thought it went.

1) You're welcome.
2) That's fair. He suffers from "sports funny", in a world of commentators who are brain injured (Aikman), senile (McCarver), obnoxiously smug (Buck), inarticulate to the point of being the missing link (Siragusa) Barkley stands out because he's blunt and entertaining.