There used to be a sports bar up north in Long Beach called Legends.

Located in my hometown's affluent Belmont Shore community – and just a few blocks from the beach – Legends became the preferred watering hole for my circle of friends. In the mid-1990s, bar standards weren't as lofty as they are today. We didn't need plasma-screen TVs or two dozen craft beers on tap. Instead, Legends offered chicken wings by the bucket, domestic suds and a hazy projection-screen TV with an intermittent picture.

Even as my friends and I moved away from Long Beach, went through college and found wives who'd appropriately lowered their marital expectations, we'd still meet up at Legends once or twice a year. It was our bar. Sadly, as time passes, everyone's shared adventures dissolve into shared anecdotes and Legends was one of the few tangible escapades we could still collectively – if only occasionally – enjoy.

In June 2005, Legends pretty much burned to the ground. M'man Smitty was first to tell me the bad news and soon after, I was receiving first-person updates from the depressing scene. For several months, there were multiple, sporadic reports that the venerable tavern was on the verge of being rebuilt and reopened. Before long, however, it became a bureaucratic black comedy crudely wrapped in red tape.

And, how's this for irony? Legends actually did reopen in December 2007. Roughly one year later, I met Smitty and our friend Thai for lunch on an autumnal Saturday afternoon. The previously cramped dining area had been expanded and a second level of seating was added upstairs. The faded, weathered memorabilia on the walls had been replaced with mint-condition autographed glossies and hologram-authenticated jerseys, balls and helmets. Plasma-screen TVs! Craft beers on tap!

It wasn't the same. One of the charms of the original Legends is that it was a comfortable little dump that carried a high-end reputation based solely on its zip code. It was where the beautiful people comingled with the hoi polloi – and everyone thought they were in the right place. The new Legends was too…new. We went two or three more times and if our silly, intransigent preference for the old Legends hadn't chased us off, then the increasingly unsatisfying food and service at the new Legends would have.

These days, my old Long Beach crew and I are bar and restaurant itinerants. Whenever we get together, one of us recommends a new location based on anything from beer selection to barbecue to the possibility of hooliganism.

A few months back, not long after our annual end-of-the-year visit, Smitty forwarded the following fantastic link. Hamburgers made from 50% ground beef and 50% ground bacon?! More than two dozen beers on tap?! 50/50's Famous Bacon Brownie?! We had our new white whale.

This past Saturday, I met Smitty and the Thai in Anaheim Hills -- almost 90 miles north of Stately Bootleg Manor -- for the Slater's 50/50 experience. Slater's is a few miles off the 91 freeway and anchors an otherwise nondescript strip mall. We arrived about 90 minutes after they'd opened and already the dining area was rapidly approaching capacity.

There an enormous, colorful chalkboard right at the entrance that provides an exhaustive listing of on-tap and bottled beers. Another beer board adorns a pillar in the center of the restaurant, but you might have to exercise your eyes a bit to find it. Some of the online reviews for Slater's had been critical of the service, but immediately after we were seated, someone came over to take our drink orders. When I was (predictably) undecided at the outset, our host brought over a pair of samples. 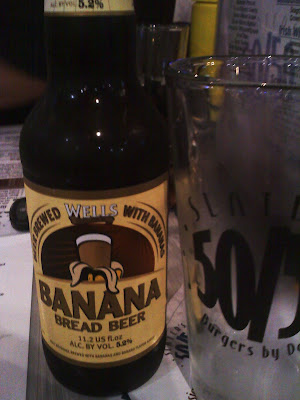 While I was impressed with the selection of porters, I threw my taste buds a change-up and went with a bottle (or three) of Wells Banana Bread Beer. You heard me. Yes, it's unsophisticated and shameless in its gimmickry. It was also a shockingly awesome pairing with the salty and sweet flavors that appeared throughout the appetizers, entree and dessert. Grade: 4 (out of 5) 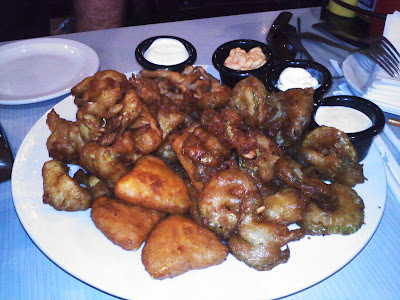 We went all-in on the appetizers, ordering a four-way plate comprised of Fried Onion Strings, Fried Dill Pickle Chips, Fried Artichoke Hearts and Fried Macaroni and Cheese. In Slater's defense, the food looked a LOT better than my cell phone camera shows above. Unfortunately, everything is fried in the same heavy beer batter, so there was an uninteresting sameness in the some of the tastes and textures.

The dill pickles pulled off a mild upset here, differentiating themselves with an appropriate tartness and holding a surprising amount of their natural crunch. The macaroni and cheese was simply decent, but probably the best take on this oft-uninspired appetizer that I've ever had. Most disappointing were the artichoke hearts. By themselves, they're one of my favorite ingredients. Here, the searing grease-heat turned them mushy and muddled their familiar flavor notes. Grade (Fried Dill Pickles): 3; (Fried Macaroni and Cheese): 2.5; (Fried Onion Strings): 2.5; (Fried Artichoke Hearts): 1.5 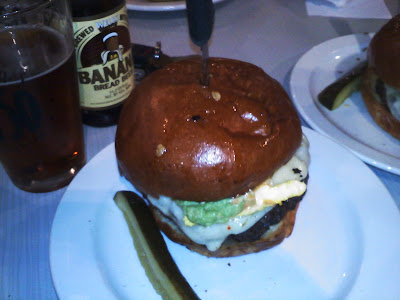 For the main event, I sided with the original 50/50 burger. No one's surprised, right? Do I have to italicize ground bacon for emphasis one more time? The original is topped with an over-medium fried egg, avocado mash, pepper jack cheese and chipotle mayo. Patrons can customize their burgers to the hilt by filling out narrow strips of paper that list all of the available condiments. (Smitty only screwed up his first four attempts before successfully completing his lunchtime Scan-Tron on the fifth try.) My only modifications: white bun and 2/3-pound patty (eschewing the 1/3-pound and one-pounder). 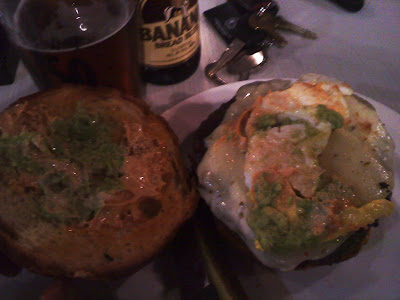 When my 50/50 burger was brought out, the bun was practically glowing with an impressive showroom finish. I cut it in half and noticed the beautiful red tint in the meat just before the ubiquitous bacon aroma hit me flush in the face. In my first few bites, the bacon gloriously overpowers everything else. Eventually, though, the cheese and avocado prove their worth as effective accompaniments with the bacon's saltiness. And, I was stunned by how much I enjoyed the fried egg. I don't ever order/eat soft-yolks, but the yellow ooze and fried flavor brought out every other topping within. I had the other half the next day and damned if it didn't reheat better than any hamburger I'd ever had. 50/50 Burger? More like...Grade: 500 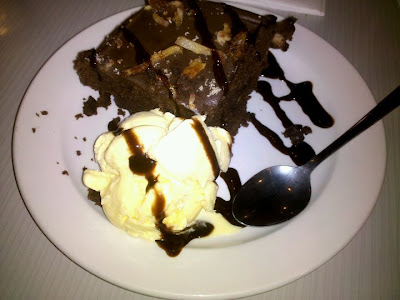 There was no way we were leaving without ordering the bacon brownie. We asked our server how big it was and she responded by shaping her petite fingers into a small square. When our desserts arrived, it was clear that her hands were not drawn to scale. Three BIG brownies sat in front of us, each with crumbled bacon on the top and bottom, chocolate sauce and ice cream (and, as luck would have it, the lightly-read blogger with lactose-digestive issues was the only one with two scoops on his plate).

Make no mistake: this WORKS. But, there are two minor quibbles that keep it from coming together entirely. First, the bacon brownie needs more bacon. I'm sure this was created to entice the quasi-adventurous, but the lack of bacon makes this feel like a potentially daring dessert that decided to play it straight. Second, the brownie needed to be sweeter so that it could play off the bacon. There's a reason that syrup-soaked bacon pancakes are the greatest breakfast ever invented. The bacon brownie was good, but it could've been great. Grade: 3.5

If I lived closer, Slater's 50/50 would make my regular restaurant rotation. The service was off-the-charts phenomenal, the sports bar ambiance was never overbearing or obnoxious and they've got hamburgers made with ground bacon. I cannot emphasize this enough.

I had a fried egg on my chicken burger while at Vegas, and it was tremendous. (KGB, in the Imperial, would go again, tell your friends.)

The wife has ordered me to take her the next time.

(1) I like how your weight shot up four pounds from your last TBG Eats review earlier in the week. THAT'S good eatin'.

(2) "Before long, however, it became a bureaucratic black comedy crudely wrapped in red tape." Brilliant. And the colors of SDSU, too!

(3) I don't know where I would draw the line among all the things you eat/drink, but "banana bread beer", I hope, would be pretty damn close.

(4) Let me know if you ever wanna make a run up there with anyone you don't know from your days in the LBC. I mean, you'll drag me to minor league games in Lake Elisnore...this place is just 20 minutes further!

I've had the Banana Bread Beer up in Boston at the lovely Sunset Grill. I'm sure this will come as a shock, but it goes just as well with breakfast like pancakes or French toast as it sounds like it does with a bacon burger and a pile o'fried.

Does this place deliver? Ya know...to Canada?

@Canuck -- We gave y'all Arby's (with a maple leaf in place of the apostrophe). You're good for now.

@Mex -- (1) Ugh. And, that was after only eating half the burger and half the brownie. (2) Our loss still burns. Damn you, Kawhi Leonard. (3) Your standards are indeed lofty, That Budweiser Guy. (4) Yes. I have to *drag* you to the Storm's $1 beer night promotion.

@Smitty -- Might indeed have to expedite a reunion of our wives. We'll talk. Sigh.

@Jeff -- Now I'm wondering if I've been eating *scrambled* eggs like a sucker all these years.

You're going to equate Arby's with such a glorious union of bacon and beef?

Canada's gotten wise to us, you guys. Those jamocha shakes are no longer satiating their appetites!

I'm taking the little lady for her birthday on Sunday. Hope Mapquest works.

Thanks for the heads up on the app's. Might get just one.

lew, i would probably just go with the pickles for apps (i did liked the 'chokes more than bootleg, the mac 'n cheese were acceptable but, considering there were exactly 3 pieces, i felt cheated a bit) and then share the dessert. those brownies are . . . large.

i intend to get bacon on the burger for my next trip. because, well, bacon-on-bacon should be simply divine. :-D

bootleg, don't knock the scramble for, properly done, they are delicious (i briefly considered 'delish' but that felt entirely too pretentious). applied correctly, however, fried eggs (c'mon, go for over easy one of these days) has its place. :-D